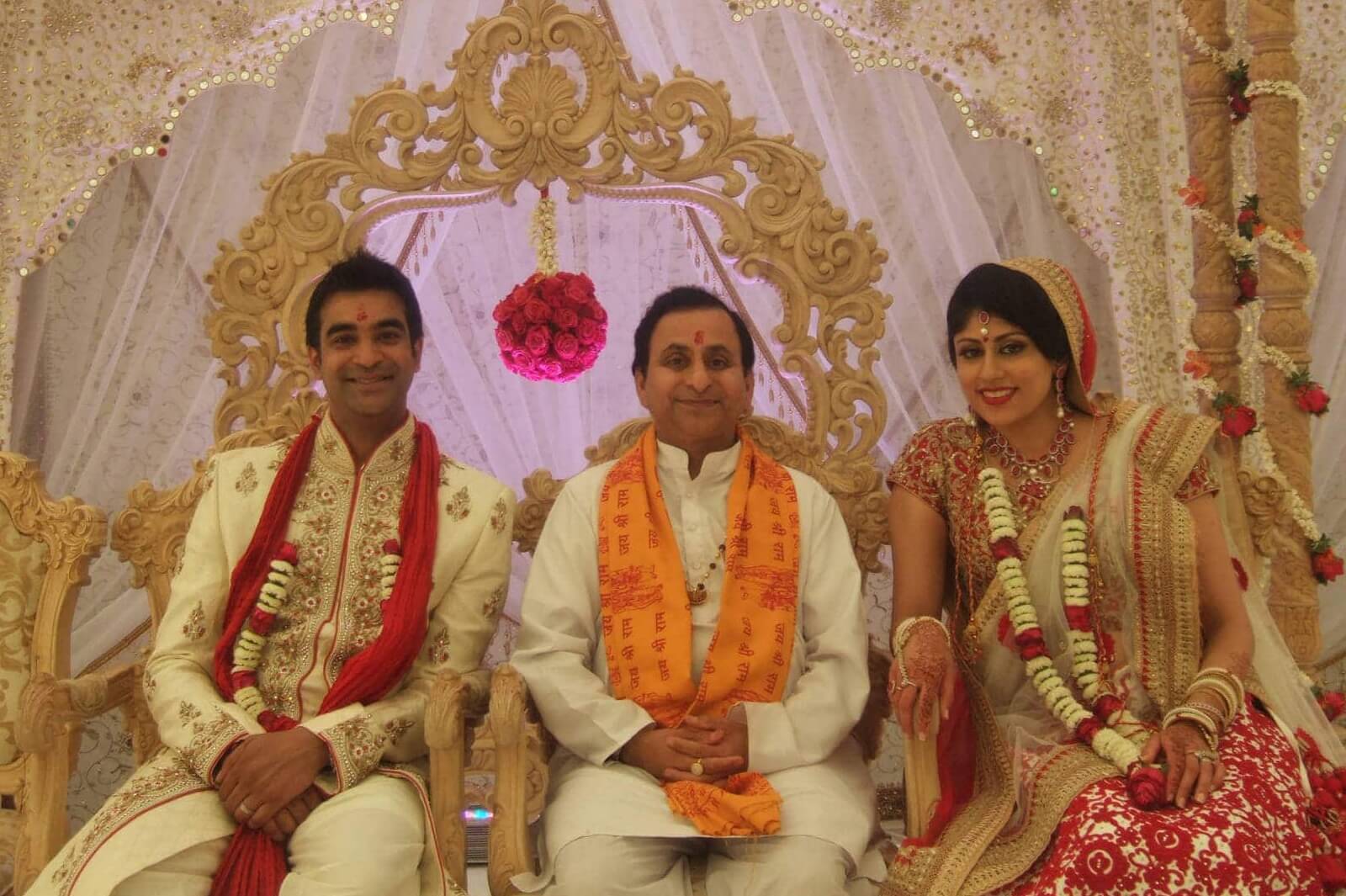 The Hindu wedding is based upon the extinction of the dominion of the father over his daughter and the creation of the relationship of husband and wife by a religious function. The religious ceremony is essential for all types of Hindu marriage. Hindu Wedding priest (Hindu pandit for wedding ) plays the main role in the Hindu wedding ceremony. Hindu priest for a wedding has knows about all rituals.

The mode of extinction of the dominion of the father differs in the various forms of marriage. Before India became independent and the British formulated the legal system, Hindu marriages were governed by local customs and Hindu law books. As per Hindu wedding customs, there are eight types of Hindu weddings that have their own significance and may be considered desirable and undesirable accordingly. Hindu wedding traditions, divide into eight kinds of marriages which are derived as per descriptions in the religious Hinduism.

Before the enactment of the Hindu Marriage Act, there were eight forms of marriage, four approved and four unapproved Thus there were eight forms of marriages of which, four Brahma, Daiva, Arsha, and Prajapatya are approved, and the remaining four Asura, Gandharva, Rakshasa, and Paisacha are unapproved.  This was owing to the large extent to which the Hindu society was spread and the dissimilar elements of which it was composed.

According to the Brahma marriage, a boy is eligible to get married, once he has completed his Brahmacharya (studenthood). Parents, who search for a bride for their son, would consider the girl’s family background, whom he is going to marry. On the other hand, the bride՚s father would ensure that the boy has acquired knowledge of the Vedas. This is how a Brahma marriage was arranged. There was no system of dowry. Among the eight types of marriage, Brahma marriage holds a supreme position.

This is marriage through mutual consent, in which the father of the bride gives away his daughter in marriage to the bridegroom whom he formally approves. The marriages are conducted according to Vedic customs in the presence of elders on both sides. The gift of a daughter (kanyadaan), after decking her with ornaments and honoring her with jewels to a man learned in the Vedas and of good character, whom the father of the girl himself invites, is called the “Brahma marriage”.

In this form of marriage, the bride is figured as an object of ‘dana’ or gift by her father or guardian to the bridegroom. In this form, the father invites and receives respectfully the bridegroom and makes a gift of his daughter, thereby putting an end to his dominion over his daughter. The important feature of this form is that the parents of the bride do not receive any consideration for giving the girl in marriage. It was believed then that the son born of a Brahma marriage redeems from sin, ten ancestors, ten descendants, and himself.

In this marriage, the father of the bride offers her to a groom, usually a Brahman priest, as a sacrificial offering, gift, or fees in return for the services rendered by the Hindu priest for the wedding ceremony.

This form of marriage is exclusively for the Brahmin because the Brahmins can only officiate in the sacrifices, as Indian priests. In this form of marriage, the damsel is given to a person who operates as a priest in a sacrifice performed by the father, instead of the fee due to the wedding priest. It is inferior to the Brahma because the father derives a benefit, which is not deemed reprehensible. It was believed then that the son born of such a marriage is said to redeem from sin seven parental ascendants and seven male descendants and himself.

In this type of Hindu marriage, the girl՚s family waits for a specific time, to get her married. If they do not find a suitable groom for their daughter, then they would marry her off to places, where sacrifices are conducted. In this case, the girl is generally married to a priest, who conducts sacrifices. According to the sastras, Daiva marriage is considered inferior to Brahma marriage, because it is considered degrading for the womanhood

The girl is generally married to an old sage. The cows, which were taken in exchange for the bride, show that even the groom does not have any remarkable qualities. According to sastras, noble marriages had no monetary or business transactions. Therefore, these kinds of marriages were not considered noble.

In the Asura form of marriage, the bride was given to the husband in payment of a consideration called “Kanya sulkam” or bride price. When the bridegroom, having given its much wealth as he can afford to the father or paternal kinsmen and to the damsel herself, takes her voluntarily as his bride ‘ it Is called the Asura Marriage.

In ‘Asura’ form of marriage, on the death of the wife, in the absence of her husband & Children, her property devolved upon her parental side.
: In the Asura marriage, the groom is not at all suitable for the bride. Although the groom is not suitable for the bride, he willingly gives as much wealth as he can afford, to the bride՚s parents and relatives. Therefore, the system of marriage is more or less like buying a product, which makes it undesirable in the present time.

It was called the Asura form of marriage, as being the ceremony of the Asuras, or the aboriginal non-Aryan tribes of India. But marriage was not construed as an ‘asura’ form of marriage by the mere fact of the bridegroom giving the bride or her father a present as a token of complement.

In this marriage, the bride’s father gives his consent under pressure, fear, or due to material, economic or financial consideration offered by the groom. For example, if a groom is from a rich family or a powerful family likes a girl and wants to marry her by all means, whether she is inclined or not, he may take recourse to this method to win over her father and marry her.

The Ramayana mentions that a fabulous amount of bride price was given to the guardian of Kaikeyi for her marriage with King Dasaratha. The Mahabharata also contains descriptions regarding the purchase of a maiden through the offer of a great amount of wealth as an act of allurement for the kinsmen of the bride. Iravati Karve writes that Madri was obtained by King Pandu through a lavish amount of money, paid to the king of Madra.

In this marriage, the bride and the groom married secretly by mutual consent (love marriage), but without the consent of the bride’s father and a formal wedding ceremony. The bride and the groom simply exchange garlands and enter the marital relationship. Since there was no formal ceremony and the consent of the elders was not obtained, such marriages were not socially approved or recognized by the families of the groom or the bride.

In this form, the bride with her own consent gives herself away to the bridegroom. A minor girl is incompetent to contract this ‘Gandharva’ form of marriage as she is incapable of giving her consent. This form of marriage indicates that the parties must be adults so that they will be capable of sexual enjoyment.

This form of marriage may be described as marriage by capture, resembling the right of a victor to the person of the captive in war. This form of marriage was allowed only to the Kshatriyas or military classes. Thus the forcible abduction of the bride from her paternal home is the essence of the Rakshasa form.

According to Rakshasa’s marriage, the groom fights battles with the bride՚s family overcomes them, carries her away, and then persuades her to marry him. This is not considered as the righteous way to woo a girl for marriage, because forcible methods are used by the groom to tie the wedding knot.

Traditionally, this form was allowed to the Kshatriyas or military classes. Rakshasa’s form of marriage is performed by abducting the bride and brutally slaying her family and relatives. In some texts, another condition that needs to take place is that the bridegroom shall fight with the family of the bride while following the ceremonial steps in a tranquil wedding. However, this condition is not essential for having a “Rakshasa” marriage. It is chiefly found either as an incident of war or as a method of procuring a wife when it is difficult or inconvenient to get one ordinarily.”

This is a coercive marriage, in which instead of taking the bride’s consent brute force is used to force her to marry the groom. Today’s such marriages will not only be considered unlawful but criminal since they involve the use of violence, kidnap, and even rape.

Paishacha marriage is the eighth and last type of Hindu wedding. It is considered as the inferior type of marriage because the girl՚s wish is not considered, even if she is not willing to marry the person chosen for her. In fact, she is forced to marry. It is the worst form of marriage among the Hindus. When the lover secretly embraces the damsel, either sleeping or flushed with strong liqueur, or disordered in her intellect, that sinful marriage, called paishacha is the eighth and the lowest form. However, in the modern socio-cultural matrix, this form of marriage is a punishable offense under the I.P.C. as rape as the principle of law holds that a culprit should not be allowed to be benefited for any wrong-doings caused by him.

This form of marriage was the most abominable and reprehensible, originating from a sort of rape committed by man upon a damsel either when asleep or when made drunk by administering the intoxicating drug. In both Rakshasa and Paisacha, there is a subsequent marriage with sacred texts and it is the original mode of securing the maiden that stamps these marriages as ‘unapproved’.  The difference between the ‘Paishacha’ and the ‘Rakshasa’ forms of marriage lies in the fact that whereas in Rakshasa form there is the scope of display of bravery and force at the same time, in the Paishacha form the maiden is taken by deception and fraud. Therefore, Sternabach considers the ‘Paishacha’ form of marriage as a part of a special branch of the ‘Rakshasa’ vivaha.