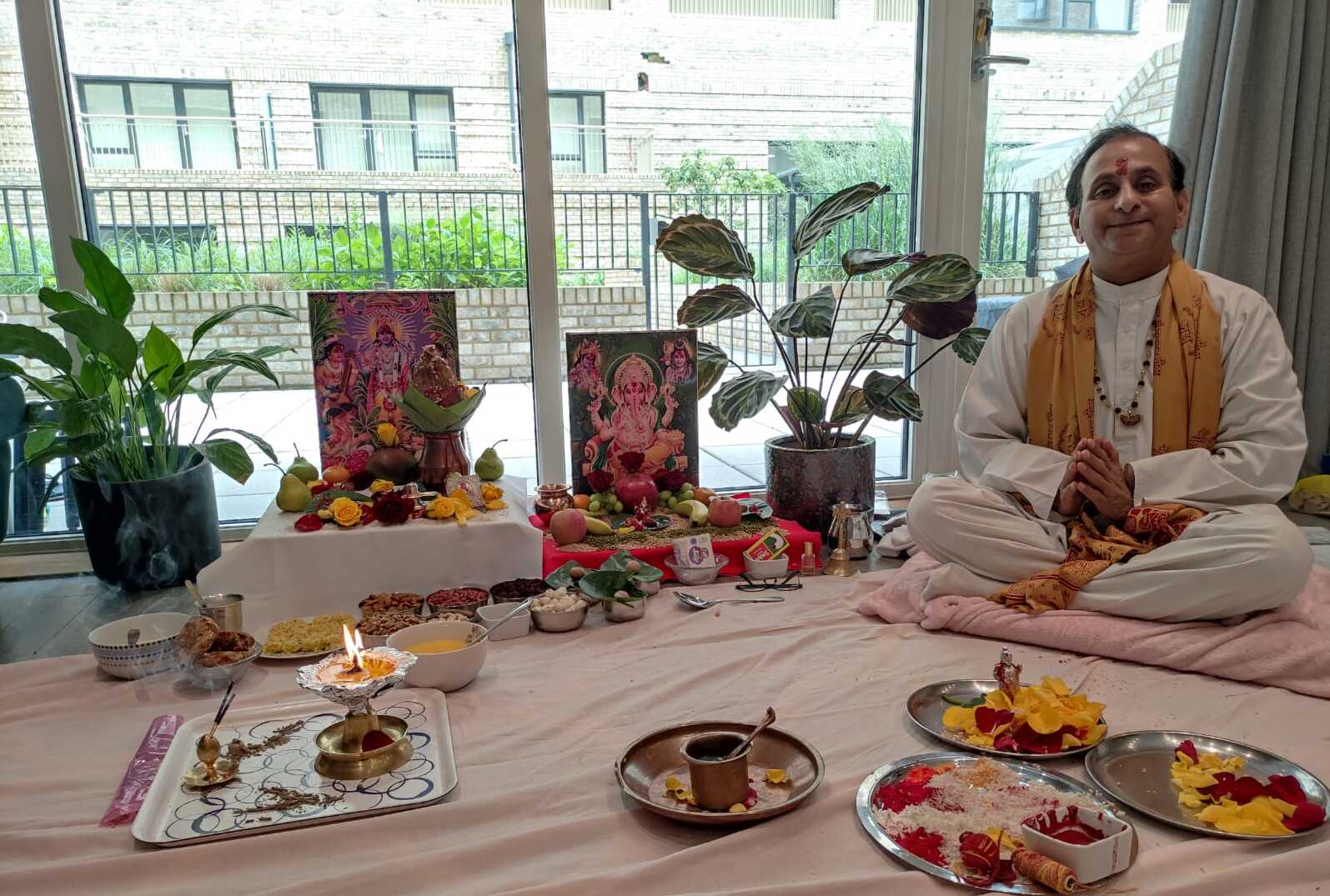 1. When to Perform Grih Pravesh Puja?

3. How to Perform Grih pravesh puja?

4. The belief behind Grih Pravesh puja

There are many such great occasions in the life of people when they express their gratitude to God. For this, organizes Havan-Poojan at home. grih Pravesh puja is also a way of expressing gratitude to God, which people often do when buying a new home.

Grih Pravesh Puja required a Qualified, Knowledgeable, and Experienced Hindu priest for house warming ( Hindu priest ) who performs Pujas as per your community, language, and region specifications. Hindu priest takes care of the entire process, right from the best Muhurat, suggesting Puja Items, etc. All you need to do is just call Hindu priest Ketul Joshi Maharaj (Hindu Priest Based in UK, London, Harrow), sit back, and relax while he works on ensuring that you get a satisfying and divine Puja experience.

Buying or getting a new house built is one of the biggest achievements in life for any person. In Hindus, whenever a person builds or buys a new house, he invites God to the house before living in it. For this, the worship of the home entrance is done. grih Pravesh puja only Experienced and qualified Hindu priest ( Hindu pandit ) can perform.

Many times people get their old house renovated and even then puja is organized. It also happens that people buy a ready-made old house and go to live in it. this all process guide by Hindu priest. Even in these situations, it is very important that you must worship Griha Pravesh before staying in that house. It is very important to take care of some special things before worshiping Griha Pravesh. Let us know which are those things.

The first mantra chanted by the Hindu priest for house warming as the Griha Pravesh Puja commences as you embark on the divine experience of a Vedic Housewarming Ceremony. as per hindu rituals Griha Pravesh Puja is performed to purify the environment of the home and protect your abode from the evil eye.house warming Puja is performed to ensure peace and harmony in the new house. Also, it is believed to drive away negativeness from the building/premises when Hindu priest chanting mantras in your new home.

A Griha Pravesh ceremony is believed to bring positivity and good fortune, for the people who live in the house when Hindu priest ( Hindu pandit ) do all puja vidhi that brings good energy and positivity to your home.
A ‘Griha Pravesh’ or a house warming ceremony, is performed only once for a home. So, it is essential to take care of every detail, to avoid mistakes.
and you hire a Qualified, Knowledgeable, and Experienced Hindu Pandit ( Hindu priest ) so all vidhi can perform very well by Hindu priest.

This puja only can perform an experienced Hindu priest If you have recently bought a home, you will need to select the right date for the ceremony so need to find a good Hindu priest. Early planning can help you to look in on the best Hindu priest so they can guide you to Shubh Muhurat for your Griha Pravesh puja. Else, you may have to remain content with a normal muhurta, if you delay in finalizing the date.

Griha Pravesh Puja and Vastu Shanti Puja are performed before shifting to a new house to drive away from the ill effects, doshas, and increases the flow of positive energy in the house. Performing Griha Pravesh also bestows the dwellers of the home with peace and prosperity and in turn protects the home from any natural calamities.

Griha Pravesh must be performed on the following occasions –
• On the purchase of a new home.
• After renovating an old home.
• Before moving into a Rented home.

When to Perform Griha Pravesh Puja?

The date for performing Griha Pravesh puja can be fixed as per auspicious grih Pravesh muhurta or any Good muhurta date based on Rashi, Name, and Nakshatra of the house owners which suggested by Hindu pandit (Hindu priest).

Muhurt for Griha Pravesh:
In astrology, the right time has been told to do any work, which is called Shubh Muhurta. Shubh Muhurta is determined to keep in mind the constellation, date, day, etc. this shubh muhurta can suggest you only Hindu priest. The months of Magha, Phalgun, Vaishakh, Jyeshtha are considered best for entering the house, while the months of Ashadha, Sawan, Bhadra, Ashwin, Paush, etc. these are not considered auspicious for entering the house. One should not enter the house on Tuesday. Griha Pravesh can be done during the rest of the week. But before entering the house, one must get the right Muhurta determined by a qualified astrologer or Hindu priest. Enter the house at the same time.

• Protects the house from negative energy, evil eyes and increases the flow of positive energy in the home.
• Bestows the dwellers of the house with prosperity, harmony, and good fortune.
• Purifies and spiritualizes the surrounding and environment of the home with holy vibes and a divine ambiance.
Helps It helps to overcome and remove any obstacles and hurdles one may come across in their life.
• Graha Shanti Puja and Vastu Shanti Puja ensure that the Vastu Purush and the nine planets are revered for preventing untimely and unfortunate events from happening to both the home and its dwellers it’s guided by Hindu priest UK.

How to Perform Grih pravesh puja?

• Chant these ten mantras are given in the Mantra section standing at the door before entering the house.
• Bring to boil cow’s milk in the new home and let it spill over a little bit when it is boiling.
• Set a place to perform the puja inside the house in such a manner that the idols should be facing the east direction.
• Place God’s photo and perform Kalasa Puja.
• Then, say your Sankalpa, i.e. you are proclaiming the purpose of your intended puja to follow.
• Then, do Vinayaka puja, followed by 108 names recitation followed by dhoop, deep, Naivedya mantra, and Pushpam.
• Then, do Satyanarayana Vrata Katha, if you can, Invite the best hindu priest to perform grih pravesh puja. If you cannot, then recite Narayana Suktam (Sahasra shirsham Devam VishwAksham VishwaSambhuva) and then full mantra pushpam (Yo pam pushpam Veda, pushpvan prajavan….).

• Then do Navagraha puja

• Then take ‘Nava dhanya’ grains in your hand, and while reciting Purusha Suktam walk all over the house and sprinkle those grains sparingly in every nook and corner of the house, incl. The bedrooms, toilets, closets, shelves, basement, racks, etc.
• Then return to your puja area and ask God to bless the house and you to ensure that you will lead a prosperous and beneficial life in it.
• Perform Aarti and Homa
• Do all the preparations before entering the house. Put a pylon of flowers and mango, Ashoka leaves at the door of the house. It is considered very auspicious to put Ashoka leaves on the door. Rangoli should also be made on the door.
• While doing any work, first of all, the Kalash is worshiped, so for the entrance of the house, fill a Kalash with water and make a swastika sign with kumkum on it and place coconut with Ashok or Mango leaves. While meditating on Lord Ganesha, the Kalash should be placed in the Northeast corner of the house or the place of worship.
• While entering the house, the woman should put her left foot and the man should put his right foot inside. The house owner and the mistress should enter the house with things like coconut, bales of turmeric, rice, milk, etc. Due to this, there is no shortage of food and money in the house.
• After home entry, kitchen worship must also be done. Instead of keeping the stove and water etc., make a sign of Swasti and worship with Akshat and incense lamps. First of all, a sweet dish of milk should be made on the stove. After that offer offerings to God. Take out food for the cow.

• On the day of Griha Pravesh, the idol of Lord Ganesha, Dakshinavarti conch shell, Shri Yantra should be installed in the house. Due to this, the grace of Ganesh Ji and Mata Lakshmi remains. The house remains full of wealth and all kinds of defects are removed.

The belief behind Grih Pravesh puja

Griha Pravesh Puja is performed before shifting to a new house to drive away from the ill effects, doshas and increases the flow of positive energy in the house. Performing Griha Pravesh also bestows the dwellers of the home with peace and prosperity and in turn protects the home from any natural calamities.

Boiling milk
The ritual that follows the Griha Pravesh ceremony is boiling milk until it spills over the rim of a new open pot. This symbolizes the abundance of prosperity and food, which will bless the house. A glass of that milk is then offered to God, and the rest be served to the family members. This gesture signifies that both joys and sorrows are to be shared amongst the family member.

What not to do during House warming Puja

Being the pillars of any Hindu ceremony, Hindu Priest(Ketu Joshi UK) manages hundreds of Hindu ceremonies each year, and always makes sure that it is a heartfelt experience for any family. It doesn’t matter whether you’d like to make it simple and short, or a long ceremony, our Hindu priest for the house warming ceremony, will be happy to collaborate with you and make sure that you get exactly what you were looking for. The Indian priest guides families through their parts, throughout the Puja and at the same time, will explain the meaning of the Puja to the ones gathered.

Why do we need Hindu priest for grih pravesh puja?

A Hindu priest will help you, guide you, with any questions or problems Find the solution, Anything you wish is good for your family.  Hindu priest will guide you on Which puja ceremony to do. Good Hindu Priest(Ketu Joshi UK) help you in so many ways in our life. Start from family planning and until we passed away. Funeral service then 12/13 days ceremony, Then asthi visarjan ceremony to do. But you need a very good and honest Hindu priest who can guide you properly according to the dharma. That’s why We need a Hindu priest for any religious ceremony and for good Blessings.