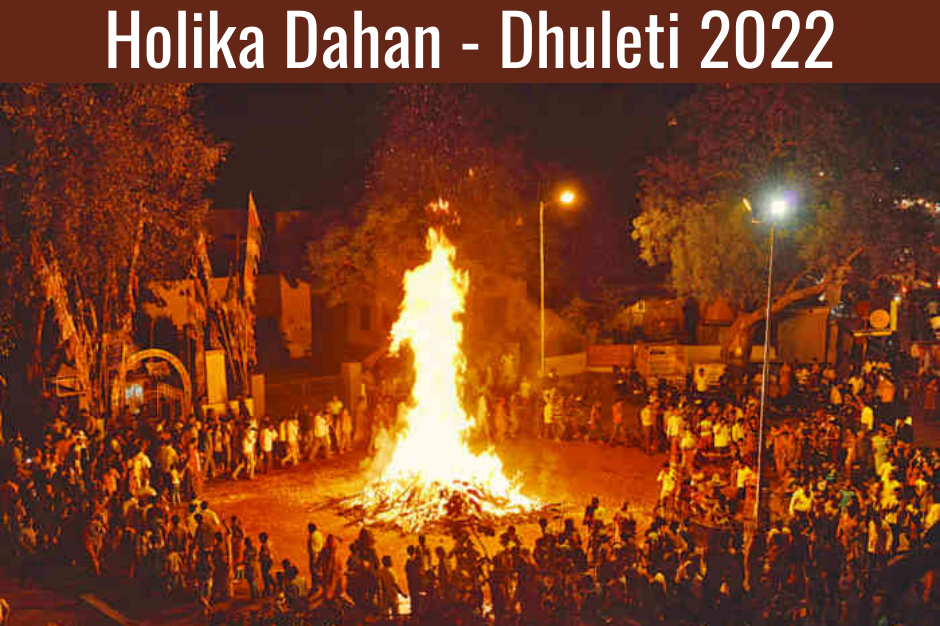 Today we will know about :-

It is believed that all sorts of fear can be conquered by doing Holika Puja on Holi. Holika Puja bestows power, prosperity, and wealth. Holika Dahan Pujan is performed on this day. The fourth incarnation of Lord Vishnu, Lord Narasimha is worshiped. On this day, one should get up early in the morning, take a bath and worship Holika facing north.

Carrying an intact flower in hand – Nrusinha chants the invocation mantra of God. Feel that weak, resourceless, supporters of idealists, able, prosperous, in times of incest, the consciousness of Lord Narasimha will rejuvenate the society by incarnating here.

One bowl of water, beads made of cow dung, Roli, rice which is not broken (also called Akshat in Sanskrit), fragrances like Agarbatti and Dhoop, flowers, raw cotton thread, turmeric pieces, unbroken lentil of Moong, Batasha, Gulal powder, and coconut. Also, fully grown grains of freshly cultivated crops like wheat and gram can be included in the Puja items.

Holi is worshiped before Holika Dahan. If a lot of Ganga water is not available in the pooja material then freshwater can also be taken, Roli, mala, colored Akshat, incense, or Agarbatti for smell And new crop grains wheat ears, ripe gram, etc.

Along with the pooja material, a shield made of dung is also placed near the bonfire. At the auspicious moment of Holika Dahan, four rosaries are kept separately. Which are made from Molly, flowers, Gulal, shields, and toys.

One garland is named after the ancestors, the other for Sri Hanuman ji, the third for Sheetla Mata, and the fourth for the family. After this, the raw yarn thread is wrapped around Holi with full reverence. The bonfire is rotated three or seven times. After this pure water and other pooja items are offered to Holika one by one. For Holika dahan puja vidhi you can call to your nearest Hindu priest to perform holika dahan puja rituals.

With the Panchopachar method, Holi is worshiped and Arghya is given water. After Holika Dahan, raw mangoes, coconuts, satnaj, sugar toys, new crops, etc. are sacrificed in Holika. In Satnaj, it is sacrificed by mixing wheat, urad, moong, gram, rice, barley, and lentils.

Aries – Do Holika Dahan with Aries with Khair or Khadir wood, also offer jaggery. By doing this you will get rid of mental troubles.

Taurus – Do Holika Dahan, a person born in this zodiac sign, with fig wood and inflict it with sugar. Doing so will remove obstacles in all your endeavors.

Gemini – Burn the bonfire with the Gemini zodiac Apamarga and the wheatear, as well as a sacrifice with camphor. Doing so will solve your financial problems.

Cancer – Burn the bonfire with the wood of Palash with Cancer and sacrifice with myrrh. By doing this, people of this zodiac sign will get good news related to jobs and careers.

Leo – Burn Holika with Madar wood of Leo zodiac sign and don’t forget to remember the ancestors by sacrificing good. Doing so will take away all your business hassles.

Virgo – Virgo people burn bonfires with Apamarga wood, sacrifice camphor and at the same time remember all the gods and goddesses. Doing so will remove all obstacles in the field.

Libra – Burn the sycamore wood and sacrifice the camphor in the Holika Dahan born of Libra. Doing so will get rid of the troubles of life.

Scorpio – Burn lightly with Khair wood of this zodiac sign and sacrifice jaggery. Doing so will benefit you.

Capricorn – Saturn and Jupiter are appearing in your zodiac sign. You also have Saturn’s halves, so today you should burn Holika with Shami wood and sacrifice sesame. Doing so will take away the troubles in your life.

Aquarius – Today you burn Holika with Shami wood and sacrifice sesame. By doing this, if you are bothered by the problem of debt etc., you will be able to get rid of it.

Pisces – Burn the bonfire with Pisces-born peepal wood and sacrifice barley and gram. Then express gratitude to the fathers. Doing so will take away all your health problems.

The importance of bonfire combustion is immense. It is believed that on this day all the evils of society come to an end. It is a sign of victory of good over evil. On this day people in the village wake up late at night and sing and dance Holi songs.

The word Holi derives its name from Holika. According to Hindu mythology, Holika was the sister of demon King Hiranyakashyapu.

As per the legend, Prahlad, a staunch devotee of Lord Vishnu, Prahlad was born to Hiranyakashyapu. Prahlad’s devotion to Lord Vishnu did not go down well with his father. As a result of this, Hiranyakashyapu tried to kill his son several times, but the Vishnu devotee escaped unhurt every time, frustrating the demon king.

After numerous unsuccessful attempts, the demon king thought of taking help from his sister, Holika, who had a boon by Lord Brahma which said she would not be burnt in a fire.

As per the myth, Holika had a shawl that would protect her from the flames of a fire. The demon king asked her sister to take Prahlad on her lap and set the two on fire. Prahlad kept chanting the name of Lord Vishnu and as the fire got intense, a gust of wind removed the shawl from Holika and went on to cover Prahlad, killing the enchantress in the flames.

Krishna is one of the most popular of the Hindu deities. In the Hindu tradition, there is a group of women, also known as the Gopika, who are followers and devotees of Krishna. Radha was a prominent Gopika and Krishna was very close with her. When he was young, the blue-skinned Krishna was jealous of Radha’s beautiful light complexion and complained to his mother. In response, she told him that he could make Radha any color he wanted if he just smeared pigments on her. From then on, there have been depictions of Krishna, Radha, and the other Gopikas dousing each other with colored powder, the origin of the Dhuleti tradition.

It is Celebrated in different regions of the country, the term is used mostly in the Braj regions of Vrindavan and Mathura. Gulal and Bhaang are an essential part of the celebrations as people smear each other’s faces with color and drink the liquid to get high and make merry.