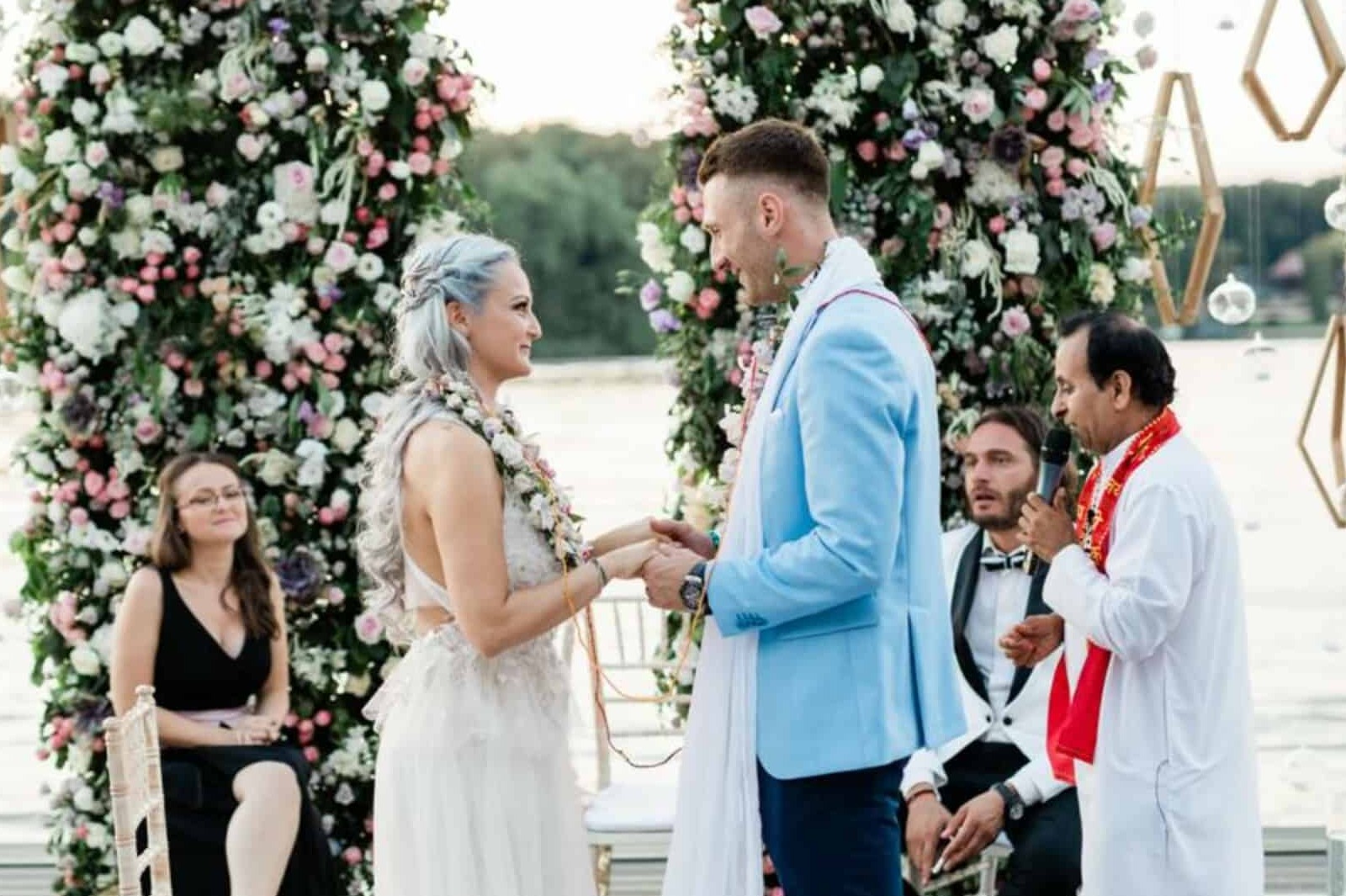 An engagement is the period of time between a marriage proposal and the marriage. Deemed one of the most important pre-wedding ceremonies not only in Hindu weddings but in other religions as well, the event of engagement is mostly an intimate one with close relatives and friends from both bride and groom’s side. This event usually takes place a few months before the wedding.

Several rituals are performed, a formal commitment is made between the two people getting engaged, and vows are exchanged to solidify the engagement.

During the ceremony, the fathers of both about to be married individuals vouch for the virtues of their child and make a formal wedding announcement of their children to the invited guests. The bride and the groom then exchange rings to solidify their engagement.

Mehendi Ceremony is about applying Henna to the bride’s hand and feet. In some regions, it is applied to the groom as well. For thousands of years, mehndi has been used as a form of body art. This is why the Mehendi Ceremony is often held the day before the wedding, to beautify and bless the bride before her big day.

This beautiful event takes place usually in the evening amidst a lot of dancing and music by the family members and friends. In the Hindu tradition, mehndi is part of the SolahShringar, or sixteen bridal adornments, which is a ritual for the beautification of the bride from head to toe at the time of her wedding.

In earlier times the Sangeet would last for 10 days in a Hindu wedding, celebrating up until the wedding day – however over time this tradition boiled down to a one-day function to fit all of the wedding events into one week.

The Sangeet ceremony takes place two or three days before the wedding, before the Mehndi ceremony. Seen as a women-centric event, Sangeet is probably the most fun Hindu pre-wedding ceremony. Thus the fun of wedding extends one more day with this celebration. It is worth noting that not only this event is fun but also wedding planners swear by it stating it truly helps the two sides forget about the wedding jitters for some time. Therefore, one can see that special themes are chosen for this occasion and dance performances are prepared.

This celebration includes dances performed by relatives and friends of the Bride and Groom, songs by the elder female members of the family sung in unison with the bride as the focal point, surround the bride, and sing traditional wedding songs. Subjects of the song range from about daily life of women to teasing the bride about her upcoming wedding and her groom.

Some referred to the dreams and hopes of the bride who is parting from her family while some tell of the pain parents goes through while sending their daughter off to her in-laws. and an open dance floor to commemorate the festivities for the following days. The event takes place at the Bride’s home or a separate banquet hall, where the Bride’s family welcomes the Groom’s family by singing Suhaag, a traditional folk song, to the tune of the Dhol.

Tilak Ceremony is one of the essential Pre Wedding Ceremonies in Hindu marriages. Tilak ceremony; is also known as the Groom acceptance ceremony. It is the first step to the bond between the two families. This auspicious event takes place mostly in the groom’s residence, where the male members of the bride’s family visit to put Kumkum or vermilion on his forehead. Apart from this, music and dance are also a major part of this ceremony in many states of the country.

The beginning of the Tilak ceremony is marked with a pooja or a havan where the families of both the Bride and groom prays for the happiness of the family and hopes for a beautiful coming life of the bride and the groom.

The groom’s father sends gifts of sugar, coconut, rice, clothes, jewelry, and henna to the bride. Friends and relatives from the groom’s family carry those gifts for the bride and her family members.

At the end of the ceremony, to confirm that the whole service has successfully ended and both the families have accepted each other heartily a ritual of exchanging coconut along with betel leaves is exchanged between the two families.

The beginning of the Tilak ceremony is marked with a pooja or a havan where the families of both the Bride and groom prays for the happiness of the family and hopes for a beautiful coming life of the bride and the groom.

The groom’s father sends gifts of sugar, coconut, rice, clothes, jewelry, and henna to the bride. Friends and relatives from the groom’s family carry those gifts for the bride and her family members.

At the end of the ceremony, to confirm that the whole service has successfully ended and both the families have accepted each other heartily a ritual of exchanging coconut along with betel leaves is exchanged between the two families.

Amongst the most fun events during an Indian wedding is the Haldi Ceremony. It is also known as pithi ceremony. One can find variants of this auspicious event in different parts of the country. In this ceremony, a paste of Haldi is applied to the bride and the groom’s body before their wedding day. This ceremony is held after the mehndi ritual in some place. The mixture used in the ceremony is known by different names in different regions, like ubtan, mandha, telbaan, etc. The mixture is believed to bless the couple before the wedding. It is known to have properties that leave the skin fair and glowing. Thus Haldi ceremony is directly connected with beautifying the bride and the groom for their big day. The color yellow is also considered auspicious and also signifies protection.

Roka ceremony is considered to be the first step towards marriage. It is like an official announcement of the consent of both the bride and the groom to get married to each other. In this ceremony, the families of two sides gather for the first time and exchange sweets, gifts, and dry fruits with each other. The mother of the groom adorns the bride by placing a beautiful dupatta over her head and blessing her with clothes, jewelry, cash, etc. In some traditions, a puja is performed by the Hindu priest.

During the Kanyadaan ceremony the father of the Bride accepts the union of the Bride and Groom, however, the Vidaai is the official sendoff for his daughter. It is an integral part of the Hindu wedding, where the bride with teary eyes steps out of the doors and throws back five handfuls of rice over her head reflecting wealth and prosperity. In a way, this ritual signifies that the bride has paid back whatever her parents have given her all these years.

As she leaves in a car/vehicle, the bride’s brothers and cousins push the car, which symbolizes that the brothers are helping her start a new life with her husband. After the car starts, money is thrown on the road to discard or ward off the evil spirits. This post-wedding event has different names in different regions but everywhere it is an important ceremony.

Indian weddings have a charm of their own. As per the tradition, the wedding is primarily organized by the bride’s family, however, the reception might be an exception. This post-wedding ceremony is basically a way of introducing the bride to the groom’s community. It is the first public appearance of the newlywed couple after their marriage. The reception ceremony is celebrated just after the main wedding day.

The reception is usually organized by the family of the groom and is a sort of a grand party. The friends and associates mainly from the groom’s side attend this ceremony. From the bride’s side, only the close members are invited. The wedding ceremony is basically a way of introducing the bride to the groom’s community. This event has no mandatory rituals to be followed, in fact, the ceremony comes packed with dancing, music, and a grand feast.

Mostly referred to as an Aashirvaad Ceremony, this very soulful event is celebrated to seek the blessings of the elder members of the family and other well-wishers. For this ceremony, the bride’s family along with relatives and friends visit the groom’s residence and present the newlywed couple sweets or fruits along with gold/silver/diamond jewelry, the couples then touch their feet.

It signifies, the confirmation of the bride and groom’s new relationship. A wedding blessing acts as a declaration of approval of the union, especially in cultures where family and community are important. Religious wedding blessings typically appeal to a higher power to watch over the couple and lead them to a long and prosperous marriage. The door of the bride’s residence is decorated with a string of mango leaves that are to stay for one year after the wedding event.

DwarRokai ceremony is held when the newlywed couple arrives at the groom’s residence. This is one of the fun-filled ceremonies in which the bride’s sister-in-law stops the bride and their brother from entering the house.

The groom’s sister and brother are asked to present her with cash or a precious gift to get the entry inside the house. Often this is a fun ceremony to witness with a very light-hearted argument between the brother and sister.

After the DwarRokai Ceremony, the GrihaPravesh Ceremony takes place. In this significant ceremony, a traditional Indian welcome is given to the new bride. During the GrihaPravesha, the mother-in-law then applies a Tilak to both the bride and groom, after which the couple seeks blessing from the elders present.

After this, the bride is to tilt a Kalash (pot) laden with rice using her right foot and then step into a dish with Alta. After this, she is to walk into the home leaving behind auspicious red footprints which is symbolic of the arrival of Goddess Lakshmi.

This ceremony signifies that the family of the groom has not only welcomed the bride into their house but has also accepted her as one of the integral members of their family. In some regions, the bride is asked to tell her husband’s name before making the entry inside the home.

MoohDikhai is an important Hindu post-wedding ceremony. The ladies unveil the bride’s face and shower her with gifts. It is a way to introduce the newlywed bride to the groom’s family. Women of the family and neighborhood unveil the face of the bride and present her either a gift or cash. The mother-in-law, in particular, offers presents to the bride as a gesture of welcome.

PagPhera is also observed as an important Hindu post-wedding ceremony. In this ceremony, the bride is taken back to her home from the in-laws’ house by her family, especially her brothers, where she stays for almost three days.

It is believed that girls are the form of Goddess Lakshmi, and thus the bride comes back to her home to ensure the prosperity of her parents. When the ceremony ends, the groom comes to her house to take her back to his house. The groom first seeks blessings from her parents, and then he takes his bride back to his house. While leaving the house, the bride’s family present gifts to their daughter and son-in-law. his is also a way of inviting the groom into the family and inside their hearts!